Five months after the start of Russia’s war against Ukraine, the government has still not decreed a widely announced general mobilization of the population. Professional and contract soldiers fight alongside members of private security and military companies. Men recruited from the self-proclaimed people’s republics of Donetsk and Luhansk in the Donbass region of eastern Ukraine were also deployed. But, instead of recruiting troops through general mobilization, the Russian recruiting offices seem to be stepping up their efforts to attract regular soldiers. Various sources report that they also target conscripts.

Alexander, who does not want to give his real name for security reasons, is a veteran. He hasn’t lived in Russia for years, but his passport still shows his registered address in Russia, where his parents still live. A summons from the local police office recently arrived at his address.

“I have been registered with the recruiting office for more than 20 years, since I was a soldier in the army,” Alexander said. “I’m a veteran and I don’t know what it’s related to. It’s probably a secret mobilization.” He himself opposes the invasion of Ukraine by Russia. If he was still in Russia and received such a summons, he said, he would try to leave the country as soon as possible.

It seems that more and more Russians who have served in the army and who have combat experience are receiving convocations. It’s the main topic of discussion on VK, a Russian social network, where people share advice on how best to react. “My son went to the office on June 14,” wrote Anna, a member of a women’s group in Arkhangelsk. “They looked at his ID cards and asked him if he wanted a contract. Then they let him go.”

Alexander Gorbachev is a lawyer and human rights activist who advises conscripts. Since the beginning of the invasion, and especially in the last month, he has observed a greater tendency to recruit regular soldiers, who join the army for a limited period. “Previously, only conscripts and men who volunteered were offered contracts,” he said. “You haven’t had mass calls and summonses.”

Now, however, the search for conscripts to serve on fixed-term contracts appears to be intensifying, according to Oksana Paramonova, head of the human rights organization Mothers of Soldiers in St. Petersburg. She said recruiters had started using unusual methods.

In Russia, men between the ages of 18 and 27 are legally required to perform 12 months of military service. Exceptions are made for those who cannot serve for health reasons. Students may also differ in the duration of their studies. Conscripts’ rights have often been violated in the past, but Paramonova said there have been unprecedented cases this year. She said final year students were called without regard to their remaining deferment period. People whose health conditions would normally prohibit them from serving were also called in, she said, citing numerous complaints to the St. Petersburg soldiers’ mothers hotline.

Calls to the workplace

Paramonova said authorities are now contacting companies directly with a list of employees they are summoning. This was not a usual practice in the past. According to Russian law, a summons received at the workplace cannot be ignored. However, Paramonova said, office projects do not require anyone to sign a contract.

The exception is the Chechen Republic of the Russian Federation. The Insider, a Russian-language online newspaper, recently reported that the republic’s authorities are using kidnappings, torture and criminal prosecution to force the men to the front lines.

The soldiers’ mothers confirm that such practices are not common in other parts of Russia. “There are cases where there is no direct psychological pressure,” Paramonova said, “but potential entrepreneurs are cheated on salary, benefits and working conditions.” She said many callers to the hotline had complained that the terms of their contracts were not being adhered to – but it often turns out that soldiers did not read them carefully before signing.

In many cases, people don’t even need to be forced into war. At present, it is not uncommon to see queues in front of mobile conscription offices. At the end of May, President Vladimir Putin abolished the age limit for military service. Now even people over 40 can enlist – and many do. 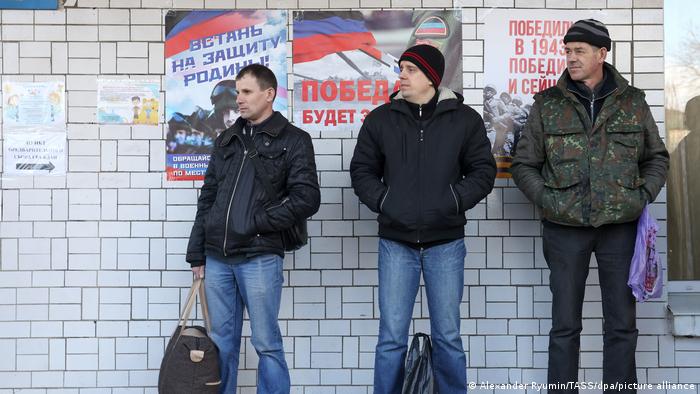 Salary is a big motivator. A large number of advertisements were placed as part of the soldier recruitment effort. People who sign contracts will receive a salary of 200,000 rubles (€3,500/$3,700). That’s five times the average Russian salary. In peacetime, Alexander Gorbachev, the usual monthly salary for soldiers was 25,000 rubles.

“There is no secret mobilization in the sense of a forced call to participate in combat operations in Ukraine,” said Oleg Ignatov, senior analyst at the International Crisis Group. Many international media and military officials expected Putin to announce a general mobilization on May 9. That didn’t happen, but Ignatov said it couldn’t be ruled out for the future. So far, he said, the decision was likely circumvented for political reasons. He said it could quickly turn passive supporters of the war into active opponents. And Russian leaders are wary of fomenting popular discontent.

So far, Ignatov said, Russia’s superior artillery power has compensated for infantry shortcomings in the advance into Donbass. According to him, however, the Russian army is insufficient to take the cities of Dnipro, Odessa or Kyiv. “We don’t know how far Russia wants to go in Ukraine,” he said. “But he does not stray from his goals and his policy. If he gets stuck, he can also declare a general mobilization.”

This article was originally written in Russian.

The UK works longer hours than most European countries